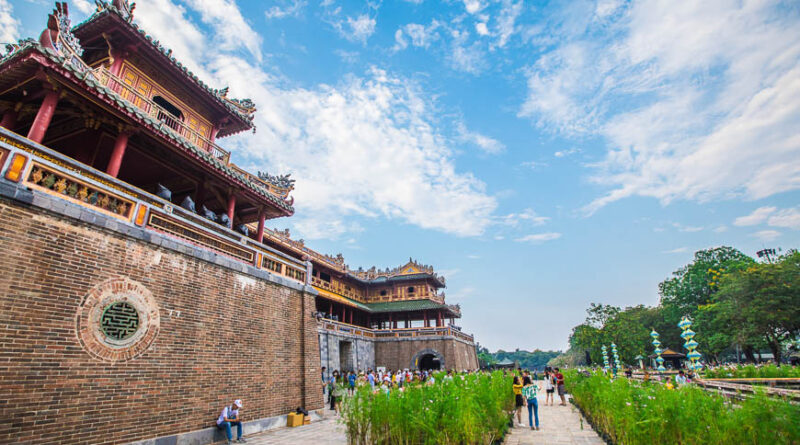 Viet Nam Fake heritage: Da Lat to me is not only a romantic resort town, but every architect who comes here wants to contribute to adorn it, this is also a maternal hometown – the living and working place of grandparents, parents, relatives, friends. my friends.

The Hoa Binh Center of Da Lat City is located northwest of Xuan Huong Lake, with a total area of ​​30 hectares, in the core of the historic central urban area of ​​Da Lat. The Hoa Binh area has been embellished since the planning of two architects Louis Georges Pineau in 1933 and Jacques Lagisquet in 1943, to the “Planning of embellishing the center of Hoa Binh area” in 1960 by architect Ngo Viet Thu, father of the Hoa Binh area. I.

In 2014, the Da Lat adjustment plan by architect Thierry Huau set out a regional vision, encouraging the development of new urban areas to the periphery of Da Lat, developing a satellite town while preserving the heritage identity. the history of the urban center. The project approved by the Prime Minister that same year, also known as Master Plan 704, clearly states: The urban structure of Da Lat includes four areas: the historic central urban area (including Hoa Binh area), the urban area clean agriculture in the North, and expanding urban areas in the East and West.

Historic center urban area – has the word “historic”, that is, it must be embellished in the direction of preserving and protecting heritage and heritage space, not allowing the construction of high-rise buildings, increasing trees, improving Infrastructure.

Therefore, I couldn’t help but worry when I witnessed the development of Da Lat.

The investor sponsored a planning project of Hoa Binh area in the direction of real estate thinking: high-rise and modernization, accompanied by a 10-storey hotel on Dinh hill, all of which are projects that impact on the heritage site. property and significantly reduce the area’s rare remaining green area.

Unlike architectural planning thinking in the direction of heritage preservation, real estate thinking often prioritizes maximizing the benefits of investors. Meanwhile, Hoa Binh area deserves priority to protect heritage and public green space, embellish in the direction of harmonizing the common interests of people and businesses.

Promoting projects with real estate thinking can make Da Lat turn into a city with fake heritage and fake prosperity.

Firstly, in terms of legal impact, Decision 229 in 2019 of Lam Dong Provincial People’s Committee approving the planning for Hoa Binh area according to the thinking of real estate projects is wrong with the General Plan of Da Lat City approved by the Prime Minister according to the Prime Minister’s Decision No. Decision 704 2014. According to this master plan of Vinhome Central Park for rent, Hoa Binh’s Vietnamese heritage quarter is located in Region I – the historic central urban area (section 6c), which is an area that must be prioritized for heritage conservation. In which, the Dinh hill area is planned as a public “cultural center land” serving the community. Now, Plan 229 again allows deforestation and encroachment on the heritage of the Governor’s Palace to convert it into “land for hotel and commercial service projects”, ie change in land use purposes, while the the area does not have enough green space.

Thirdly, in terms of cultural and historical impact, the project will erase the unique historical value of the Viet street heritage area, high-rise Hoa Binh area, while preserving the French street heritage area. The “solution” of bringing the Governor’s Palace to a height of 28 meters to build a 10-storey hotel below means destroying a real heritage to make a fake “legacy” on high. This change will not keep the original value of the master plan, brick structure architecture with the surrounding forest landscape and the cultural significance of this public space in the hearts of the people.

Fifth, in terms of economic impact, the proposal to high-rise Hoa Binh area according to the above real estate project requires very high foreign investment capital, increasing the level of economic dependence of the locality; increased pressure on the public budget of the province due to the need to pay for clearance compensation, investment in upgrading infrastructure to serve the sharp increase in construction floor area. It also makes the local budget revenue not high after deducting the cost of clearance compensation, infrastructure investment and other costs while the main benefit belongs to the investor. It increases competitive pressure on commercial services for small traders and small businesses in Da Lat market and Hoa Binh area, which may increase the risk of bankruptcy for them.

The image of the future modern high-rise building in Hoa Binh area that investors are promoting will be more suitable in the peripheral new urban area, while imposing on the center will only bring “false prosperity”, flashy outside. .

Sixth, in terms of social impact, the high-rise building of the Vietnamese street heritage will erase the identity values ​​that have helped connect Da Lat lovers, making them feel alienated and less attached to Da Lat. , not to mention the free public green and cultural space for the public being converted to private commercial service space for a fee.

Most of the criticisms of experts on many channels, at surveys and scientific conferences over the past two years, are that the architectural planning solution according to the thinking of conservation and embellishment in Da Lat brings about more benefits.

In two recent polls, over 3,000 readers of VnExpress (more than 90%) said they “want to keep the status quo”, do not want to raise the Governor’s Palace 28 meters to build a 10-storey hotel below, and above. 450 readers of Tuoi Tre newspaper (more than 97%) said they wanted to “preserve and embellish the Dinh hill area for public works”.

To date, just over a dozen experts have supported the solution of building a 10-storey hotel, while 77 architects have signed a petition to Lam Dong province, the Ministry of Construction and the Prime Minister requesting a review of the legality. of the planning of the central area of ​​Hoa Binh, expressed concern about the encroachment of cultural and natural heritage of the planning, not to mention several hundred articles by leading experts in favor of thinking about conservation and embellishment of the area. area.

The above recommendation from April 2019 has not yet received a response from Lam Dong province. Da Lat leaders have not yet made a policy of wanting to study Dinh Hill and Hoa Binh area according to architectural planning solutions to preserve and embellish to compare scientifically, openly and transparently with architectural planning solutions. real estate project before making a final decision on the fate of this legacy.

Sapa is a direct lesson showing the harmful effects of the policy of high-rise building and concreting on the heritage of architectural planning and natural heritage of a resort city. The world has had many successful lessons in economic, cultural and social aspects of conservation planning and embellishment solutions to help the heritage center become a famous pedestrian area such as Greenwich artist village (New York, New York, America), the Old Quarter of Montreal and the Old Quarter of Quebec (Canada), the Montmartre Hills (Paris, France), the Pike Place Market (Seattle, USA)… that Da Lat can learn from.

If the matter is in the past, the wrong decision will cause irreparable harm to the future of Da Lat.